The Kremlin played down expectations on Monday that direct talks with Ukrainian negotiators scheduled for Tuesday and Wednesday would lead to a deal to end the deadly and devastating Russian invasion.

“Unfortunately, we cannot say that any significant achievements or breakthroughs have been achieved so far,” Russian presidential spokesman Dmitry Peskov said on Monday. But he said a face-to-face meeting in Turkey could allow for “more focused, tight and meaningful” talks.

Russian Foreign Minister Sergei Lavrov has rejected a recent call by Ukrainian President Volodymyr Zelensky for a meeting with President Vladimir Putin, saying it would be counterproductive until Ukraine and Russia come close to agreeing on key issues.

Zelensky told independent Russian reporters on Sunday that his government would consider declaring neutrality and offering Russia security guarantees. He said the agreement would include keeping Ukraine free of nuclear weapons.

But Zelensky said adopting a neutral status needed to be guaranteed by third parties and put it to Ukrainian voters in a referendum after Russian forces withdraw — within a few months once Russian forces leave.

Russia almost immediately banned the publication of Zelensky’s statements. Roskomnadzor, the Russian federal agency that regulates communications for Moscow, issued the ban on Sunday and said action may be taken against Russian media that participated, including “those that are foreign media that act as foreign agents.”

Russia recently passed a law threatening up to 15 years in prison for anyone who spreads information that contradicts Moscow’s version of the war.

►Kyiv Online Learning School reopened on Monday. Teachers were told not to confuse students who were already stressed by the war.

Russia, which released information on its losses in Ukraine for the first time in weeks, said 1,351 soldiers had been killed and 3,825 wounded as of Friday. NATO put the number of Russian dead at several thousand, while acknowledging that the true number is difficult to determine.

The Academy Awards took 30 seconds of silence for Ukraine, from tributes from Ukrainian-born Mila Kunis to Academy Awards that faded to black in the middle of a Sunday show.

A senior Ukrainian official accused Russia of trying to divide Ukraine into two countries on Sunday, drawing a comparison with North and South Korea.

The German Energy Minister said, on Monday, that the Group of Seven countries agreed to reject Russia’s request to pay for Russian energy imports in rubles. “All of the G7 ministers fully agreed that this (would be) a clear unilateral breach of existing contracts,” Robert Habeck told reporters on Monday.

Russia supplies about two-thirds of Germany’s natural gas, half of its coal and a third of its oil.

The demand for payment in rubles remains, said Kremlin spokesman Dmitry Peskov, and warned that “it is clear that we will not provide gas for free.”

Ukrainian President Volodymyr Zelensky said Ukraine’s priorities in talks in Turkey this week would be “sovereignty and territorial integrity”.

“We are looking for peace, really, without delay,” Zelensky said. There is an opportunity and a need for a face-to-face meeting in Turkey. This is not bad. Let’s see the result.”

David Arachhamia, leader of President Volodymyr Zelensky’s Servant of the People party, said on Facebook that the personal conversations were agreed in a video consultation. The two sides met several times without reaching an agreement. 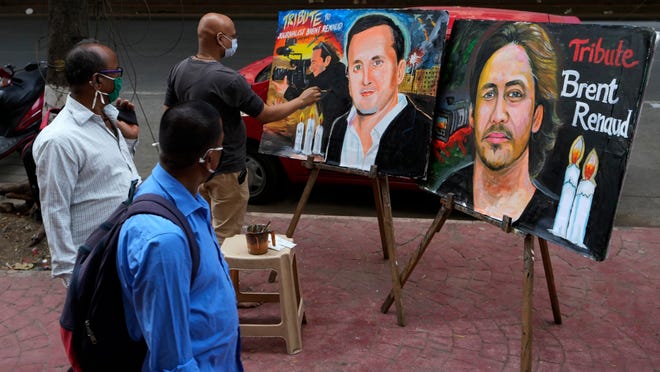 From Lebanon, Iraq and Syria to Sudan and Yemen, millions of people in the Middle East whose lives have already been upended by conflict, displacement and poverty are wondering where their next meal will come from.

Ukraine and Russia account for a third of global wheat and barley exports, which Middle Eastern countries depend on to feed millions of people who live on subsidized bread and affordable pasta. They are also major exporters of other grains and sunflower seed oil used in cooking.

Even before the war in Ukraine, people in the countries of the Middle East and North Africa did not have enough to eat. Now with the trade disruption caused by the conflict, more goods are either unaffordable or unavailable.

“People simply cannot buy the quality or quantity they need, with those in countries affected by conflict and crisis … at greater risk,” said Lama Fakih, Middle East and North Africa director at Human Rights Watch.

Just one month after the Russian invasion of Ukraine, more than 3.6 million refugees were forced to flee the country, making the refugee crisis the fastest growing since World War II, according to United Nations refugee agency.

An additional 6.5 million people were internally displaced within Ukraine and more than 12 million others affected in the war-affected areas.

And the agency announced in a bulletin that “many people are still trapped in the areas of escalating conflict, and with basic services disrupted, they are unable to meet their basic needs including food, water and medicine.” “The delivery of life-saving aid remains a challenge, with safe access to humanitarian aid still lacking.”