The 2022 US Open takes place at the USTA Billie Jean King National Tennis Center in New York City from August 29 through September 11 and sees some of the world’s best and female tennis players battle it out on hard courts for the $2,500,000 top prize. Russia’s Daniil Medvedev is the reigning men’s singles champion and has every chance of winning consecutive US Open titles.

Since rebranding to the US Open, the tournament has seen several players win back-to-back titles. The likes of the legendary John McEnroe won three in a row from 1979-1981, Ivan Lendl achieved the same feat between 1985-1987 before Roger Federer was victorious in five straight US Opens between 2004-2008. Nobody has managed to win back-to-back men’s singles titles at the US Open since Federer’s five on the spin.

Medvedev is the man to do it if anyone is because the 26-year-old Russian excels on hard courts and the US Open sees players complete on 15 DecoTurf surfaces. Medvedev has a fantastic record at the US Open since 2019, reaching the semi-finals, final, and then winning last year. Make no wonder the leading sites offering US Open betting have Medvedev as one of the favourites to life the 2022 winner’s trophy.

Medvedev Demolished the 2021 US Open 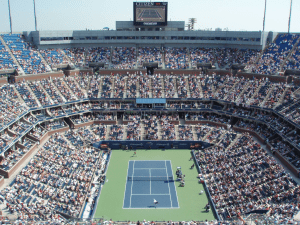 See also  A woman shoots a Russian drone from the balcony ... with a tomato can

The Russian looked unstoppable after defeating number 12 seed Felix Auger-Aliassime without dropping a set, which set up a clash with former world number one Novak Djokovic in the final. Djokovic, as he usually is, went into the final as a favourite but lost 4-6, 4-6, 4-6 as Medvedev won his first US Open.

The Year So Far For Medvedev

We are now more than halfway through the year, and surprisingly, Medvedev is still to win a title in 2022. His single record stands at 27-10, although the ATP ranks him number one on the planet.

He reached the semi-finals of the APT Cup in Sydney, where he lost 4-6 0-6 to Felix Auger-Aliassime. Medvedev then navigated his way to the finals of the coveted Australian Open tournament, where he faced Rafael Nadal. Medvedev won the first two sets, including a tie-breaker, but then lost three consecutive sets, leaving Nadal to bank his second Australian Open title.

Dutch 205 in the world Tim van Rijthoven thwarted Medvedev in the APT Hertogenbosch on grass in early June, before the Russian lost in the finals of the APT 500 Halle, again on grass, to Hubert Hurkacz. He was forced to sit out Wimbledon because the organisers banned Russian players due to the Russian invasion of Ukraine, meaning Medvedev will go into the 2022 US Open fresh and ready as he attempts to defend his title and become the first men’s singles player in 14 years to win two or more consecutive US Open tournaments.

On paper, only Djokovic, off the back of another Wimbledon title, can stop Medvedev in his tracks. However, Medvedev outclassed and outplayed the Serbian the last time they met in the US Open finals in 2021, and one would expect a similar result this time around.